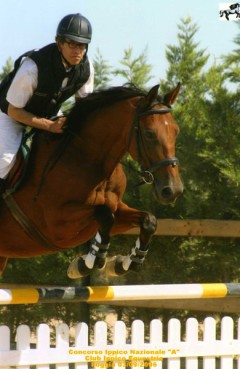 In New York, in the summer of 1985, he decided to start taking riding lessons at the Claremont Academy (http://www.potomachorse.com/clarmont.htm﻿), the oldest riding school in the United States, established in 1892 and located in a historic building of the Upper West Side of Manhattan just steps from Central Park, where it was possible to ride thanks to the presence of a path reserved.

He continued his education at the Overpeck Riding Centre, located just outside New York, which has broader facilities, including two indoor courts and outdoor courts for dressage, show jumping and eventing.

He then took lessons in eventing with John Craven at "The Southlands Foundation" (http://www.southlands.org/) in Rhinebeck (NY), and jumping with Barbara Soley (http://www.coastalequestrian. com / trainer), a pupil of George Morris, at "Stonehedge Farms" (http://www.stonehedgefarm.net/index.htm) in Suffern (NY).

But it is especially in the dressage that he addresses his interests in the knowledge that this discipline is the basis of formation of the rider and the horse.

In this sense, he decided to attend the Riding School "Knoll Farm" (http://www.knollfarm.com/) in Brentwood (NY), whose owner and instructor / leader was  Anne Gribbons (https://www.horseandriderbooks.com/anne-gribbons/)﻿, great Sweden-born rider who stood out in several competitions at the highest level taking also part of the American team at the World Championships in 1986.

Returned to Rome in 1990, he enrolled at the Riding Centre "Capannelle Sporting Club", which had at that time, as technical director, Duccio Bartalucci.

He moved to Paris in 1991, and had the opportunity to attend the Equestrian Centre "L'Isle-Adam Parmain" (http://chiapbrieussel.unblog.fr/) owned by the mother, as well as trainer, of a several times dressage champion of France Dominique Brieussel, bronze medal in the 1995 European Championships and fourth in the Olympic Games in Atlanta.

Over the years he participated in stages at the "Yorkshire Riding Centre" (http://yrc.co.uk/) of the brothers, both Olympians, Christopher and Jane Bartle, but especially at Mary Wanless (http://www . mary-wanless.com /), a trainer of great talent that has revolutionized the way we teach horsemanship.

He has participated in numerous competitions in show jumping and dressage, and is a member of the FISE training staff. 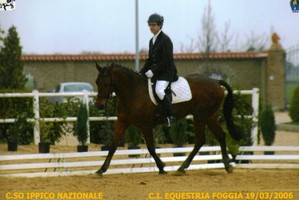