We know how in performing canter one of the primary aims is to straighten it, and this is attainable only by slowing it.

To straighten and to slow the canter are actions that must be absolutely pursued together.

The horse in fact is not, in the canter, naturally straight, and he is not in the same way in the two hands.

Generally a horse naturally flexed to the right, for example, canters in a position relatively straight on the left hand, but with the inside hind, that is the left, out of the mass. On the other hand, the right, this deviation will be added to the natural one peculiar of this gait.

Together to other exercises in circle, the counter-canter (fig. A) is certainly a very effective exercise not only in terms of collection, but especially in the attainment of the straightness in this gait, since it allows the rider to set a proper attention to the hind leg that escapes and to prevent that the horse refuses to flex it, and to obtain that its activity gets a carrying function instead that of the pushing one. Not only, the counter-canter allows to intervene also on the outside hind.

It makes the canter more cadenced, active and with superior impulse.

It strengthens the lumbar region of the horse and  promotes the rotation of the pelvis, but it needs to be performed in a right way and its use should not be exaggerated, as well as introduced with progression.

The most common errors, in performing it, are represented by horse’s evasions in the position of the hips (fig. B) or of the shoulders and the neck (fig. C) outside the line of the circle, exaggerating the bending towards the leading foreleg. This annuls the benefits of the counter-canter reducing it to the simple false canter.

Particularly if the neck is allowed to flex more than the rest of the body, the exercise becomes harmful.

The rider must take control of the neck always and exclusively at its base; that means: he places the shoulders and the withers and let the neck to be positioned accordingly.

If he tries instead with the rein action on the horse head, that is on his mouth, he risks to lose control of the hips and to inhibit the engagement of the hind legs.

In this sense it is of vital importance the correct use of his seat by the rider.

Finally, the greatest error is to perform the counter-canter in circle with the neck flexion opposite to the bending determined by the leading foreleg, that is towards the inside of the circle (fig. D)

As a matter of fact the horse back is forced in a S shape and the rider acts with the reins in positioning the neck, and the result is that the exercise loses its value which is, as has been said, to act on the inside hind that shows problems of engagement and flexion, besides the fact that the horse is invited to escape with both hips outside the line of the circle. 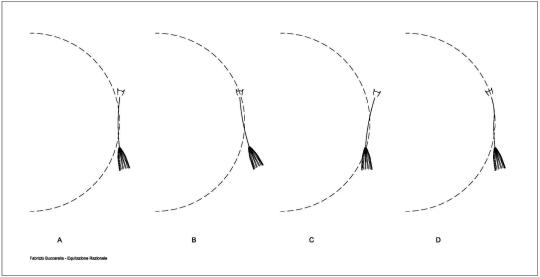 When you look at the photographs of great dressage riders you can see how they do not really adopt very long stirrups as it is generally believed, and what can be observed instead by less skilled riders. The reason lies in their ability to make effective use of the upper part of the legs, which would be almost impossible for them by adopting a disposition close to vertical.

The influence in fact that an appropriate use of the thighs of the rider can exercise in the process of raising the horse's back, in coordination with other actions of course, is huge.

They in fact act in an important area of ​​the body of the horse that is next to the junction of the cervical part with spinal one, the area that is surrounded by a system of very powerful muscles.

If we imagine the system of the ligaments of the back of the horse as a structure similar to a suspension bridge whose stanchions are the withers and the lumbo-sacral joint, the function of the upper part of the legs of the rider may be assimilated to that of a girder.

In order to fulfill this task, they must possess not only a high muscle tone which makes them solid, but also a suitable inclination, since their action is rather directed downward and in isometric form. All the muscles of the thighs is involved, including the abductor muscles, and their action should be as always discontinuous.

The Pressure on the Stirrups

The issue of weight that the rider exerts on the stirrups is often underestimated to such a point that you see riders also of a high level have a contact on the stirrups not precisely correct, both in terms of position of the foot in them (heels too low or even at the tip ) both in terms of excessive weight or variation of the same on them (for example in the raising trot).

Yet the pressure on the stirrups is also an aid, and should therefore be managed and implemented in coordination with other aids.

Not only: the weight on the stirrups is transmitted through the stirrup leathers at their point of attachment to the saddle and then in a very restricted area located behind the withers, an area that is very sensitive, and thus its effect is much larger than that exercised from pressures on larger areas.

It 's very rare, for example, to see a rising trot properly executed. Often the riders seem to get up in the stirrups and accordingly vary the weight of them at every stride.

In fact, the rising trot should occur with the pelvis that describes an arc of a circle with its center at the knees, with a slight inclination of the trunk at the time of the seating and the opening of all the angles at the time of the rising in such a way that the shoulders and the head of the rider remain at the same height along the horizontal line of the movement.

To this end, the contact with the saddle should extend over the entire internal area of the thighs so that the weight on the stirrups remain unchanged.

It is obvious then that the pressure on the stirrups must respect the same rules as other aids: that is it must be used consciously, and always in a discontinuous way, to get a result, and stopped when no longer needed.

The weight as an aid

The rider's weight is an aid that always works, which is why it is so important to know how to manage it and be able to be centered. In the lateral work, for example, the rule is to have its own weight in the direction of the movement, but it is especially important that also in this case the rider knows how to use its own weight in a discontinuous manner, ie to be able to alternate its action by that in the sense of the movement to the one centered and vice versa, taking care to engage in this act only the ischium and not the upper torso.

Most riding books say that you must sit with more weight on the inside seat bone in the transition to canter and in the flying changes.

Steinbrecht however, in his book "The Gymnasium of the Horse," states that you should transfer your weight on the outside seat bone in these two phases.

If we follow his reasoning we realize that he is right. Steinbrecht argues that you should never put your weight on horse's hind leg that is farthest from its center of gravity, because it would cause the horse to work harder with this  leg. In general the weight of the rider must therefore charge more the carrying hind leg.

If we analyze the sequence of the left lead, for example, we see how the right hind leg to be further back than the left one, so you have to transfer the weight more on the latter. Now if you want to ride a flying change, you have to keep your weight on the left in order to facilitate the right hind leg to cover the distance to make the change. The transition to canter should therefore be carried out in the same way by placing one's own weight more on the outside seat bone.

A traditional footfall in the canter:

A 4-beat canter with negative dissociation (here it is shown in a counter canter):

A 4-beat canter with positive dissociation:

We must take note that the type of dressage rewarded today, in local competitions as well as at the Olympics, does not correspond in any way to the dictates of Classical School horsemanship.

It is no wonder, therefore, that horsemen and horsewomen with no talent and scarce technical skills step up in the rankings of this discipline.

The current conception of the FEI Dressage goes beyond the scope of dressage itself, in its various forms and sensitivity, to reflect on all equestrian disciplines.

My main area of activity is the training of horses for eventing and show jumping.

Although personally I am sensitive to the artistic aspect of dressage exercises, professionally are primarily interested in the effects of athletic benefits they bring in terms of flexibility, muscular strength and speed.

My experience allows me to say that traditional French horsemanship preparation is essential for athletes which are the jumping horses.

I think, however, the excesses of the modern high-level dressage lead to a mediocre show that no longer has any value, or artistic, or athletic.

Here's another comparison between these two conceptions of dressage: the two images are taken at the same time of the action.

In the picture on the left (Nuno Oliveira), we see the rise of the base of the neck, back support, the rear engaged under the mass and the horse that is light on the front end, all these athletic elements are essential for jumping horses.

In the photo on the right is the opposite, the base of the neck and the hips collapse, the horse is hyper-flexed and heavy on  the bridle.

Jumping a fence with this horse would be a risky action!

This video demonstrates once again the low level of equestrian culture in Italy.

The introductory remarks, by a "known" trainer, instead of taking into account a determining factor as the different type of surface used in the two events mentioned (sand in Los Angeles, ground with much better performance in London), a factor that affects enormously the quality of the gaits of horses, and to admit that the very quality of the horses is much improved as is natural, as is the improved their feeding and management, etc.., merely asserts that the discipline of dressage has evolved surprisingly, the discipline, thereby implied that the fifteen riders of London have all added something more technical than Reiner Klimke! 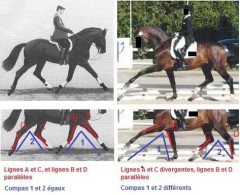 This is not only true, but rather, in the opinion of many, the discipline of dressage has worsened in recent years, as we see more and more horses hyper-flexed, unnatural gait as some examples of extended trot with an exaggerated extension of the forelegs , etc., not to mention finally the same position of the riders, which in many of them is just unsatisfactory.

Look for example, among others, precisely to the italian rider! Who knows what her horse would have done in the hands of Klimke!

And here we open another important subject: that regarding the judges, who have an important role on the evolution or worsening of dressage, as, rewarding some movements over others, they influence the training choices of riders and their trainers. but ...... I will stop here.